For  some reasons, large scale bloodshed always occurs on a Sunday.  Or maybe that is the most convenient day for people to meet in a mass grouping.  I recently heard the phrase “Bloody Sunday” used to refer to an event portrayed in a current movie, and realized  that I knew of three Bloody Sundays in the Twentieth Century without doing any research; there may be more, and in fact I found another as mentioned below.  Some are better known than others.  One, as I said, was recently made into a  major motion picture, another was the subject of a popular  rock song by a group from the area where the blood was shed, and the third  may have ultimately led to the Russian Revolution and thus altered the shape of the Twentieth Century.

We talked about a massacre in Paris recently, but that was not called Bloody Wednesday because the agents doing the  violence did not work for the government.  We will see in the examples below that government agents are needed  before the action gets celebrated by Bloody, as well as occurring on on Sunday.  Bloody Sundays involve the shooting of civilians, usually protesting the actions of the government, being  shot by forces of the government.

The first one took place in Saint Petersburg, Russia on January 22, 1905 after 2 pm.  A note about the date.  As many astrologers need to know, a change was made between the Julian calendar and the Gregorian calendar on October 15, 1582.  There are ten missing days at that point to adjust to the difference between the two calendars.  But not every nation made that change at that time.  Britain, and thus the United States, did not make the change until 1753, which is why George Washington has two separate birthdays, Old Style (Julian) and New Style (Gregorian).  And the change was not made in Russia until the Russian Revolution, which is why you can find different dates for the so-called first Russian Revolution, of which this first Bloody Sunday was the beginning.

The peasants of Russia were increasingly unhappy with the czar.  Early in the morning of Sunday January 22 (New Style) they began to gather around the Winter Palace in St. Petersburg , the home of the czar, not realizing that he was not there.  Troops were also there to protect order.  A few shootings happened before noon that day, but it appears that most shooting happened after two that afternoon.  Of the thousands of demonstrators presents, hundreds were killed, though exact figures are hard to come by.  This killing by troops  of the government made the peasants stronger, they were no longer in such awe of the czar.  This was the beginning of the first Russian Revolution.  It did not really change the monarchy, and so in another dozen years there was another Russian revolution that did get rid of the czar once and for all. 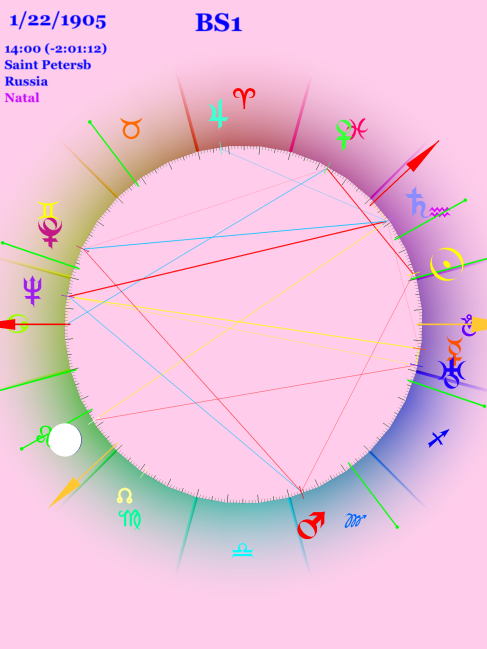 In the chart for this event we see Mars — gunfire — sesquiquadrate Pluto and square Sun.  A combination of Mars and Pluto can indicate mass murder (as well as other things, in case anybody with that combination freaks  out on hearing this).  There is a tight sesquiquadrate between Saturn and Neptune.  Saturn and Neptune are a complex combination, which we will devote a whole article or two to at a later date.   But it can indicate an idea that was once thought of as good is now seen as rotten.

The second Bloody Sunday of the Twentieth Century occurred on a Civil Rights march from Selma, Alabama to the state capital of Montgomery on March 7, 1965.  Many  big names of the Civil Rights movement of the Sixties were present, such as from SCLC (Southern Christian Leadership Conference) were Martin Luther King  and Hosea Williams and from SNCC (Student Nonviolent Coordinating Committee) Stokely Carmichael and John Lewis. A preacher had been  murdered a few days before, and this fed the momentum for the march.  When the 600 marchers approached the Edmund Pettus bridge, they were violently prevented  from crossing by the state police of  Alabama.  This event is the subject of the recent movie, Selma.

In the chart for this Bloody Sunday, we see the Uranus Pluto conjunction, which is the hallmark of the Sixties, conjunct Mars, and all three opposite the Sun, indicating on this day there would be a revolutionary and violent — martial — event.  Also during 1965, though not directly related to this event, the US greatly increased the number of troops in Vietnam, thus escalating the war. Also in this month the US started the famous Operation Rolling Thunder which  bombed North Vietnam. This was one of the most intense bombing campaigns in US history.  Mars is also trine Jupiter and sextile Neptune which in turn is opposite Jupiter.  The wide Neptune Pluto sextile — the long sextile discussed previously, shows that the Cold  War was still happening.

The third Bloody Sunday,and the subject and tile of an early hit by the Irish rock band U2,  occurred on January 30, 1972 in Derry, North Ireland at 4:10 in the afternoon.  In this incidence, 26 civil rights protesters and civilians were shot by the British army; 14 died, most immediately. The marchers were protesting interment,  the British policy of imprisoning Irish citizens without trial.  Many of those shot were fleeing the soldiers. A recently-released investigation has raised   new questions about culpability in  this matter.

In this chart for the third Bloody Sunday, we see Mars elevated and   in Aries, but unaspected.  The Midheaven is also in Aries for this location, suggesting that a violent, Arian, picture would be shown to the world.  Pluto is opposite the Midheaven and thus hidden from  view, and trine Saturn.  This event occurred at a Full Moon and shortly before sunset; sunsets occur early in January in Ireland..  Neptune is trine the MC, suggesting some uncertainty over what the word makes of this event.   An initial investigation essentially gave the British soldiers a free pass.  A more recent investigation, results released in 2010, hints that some soldiers were culpable of the killing.

But some have suggested that the U2 tune refers to an older “Bloody Sunday.”  This  occurred on November 21. 1920 at 15:25 in Dublin, where  the Royal Irish Constabulary opened fire in a football stadium, killing 14 civilians.  This was a “reply” to the assassination earlier in the day of 14   people, mostly British agents, killed by the IRA (Irish Republican Army).  Both these killings took place in Dublin, Ireland which had long been a colony of Great Britain, and the Irish people were none too happy with this state of affairs, which resulted in both Bloody Sundays. 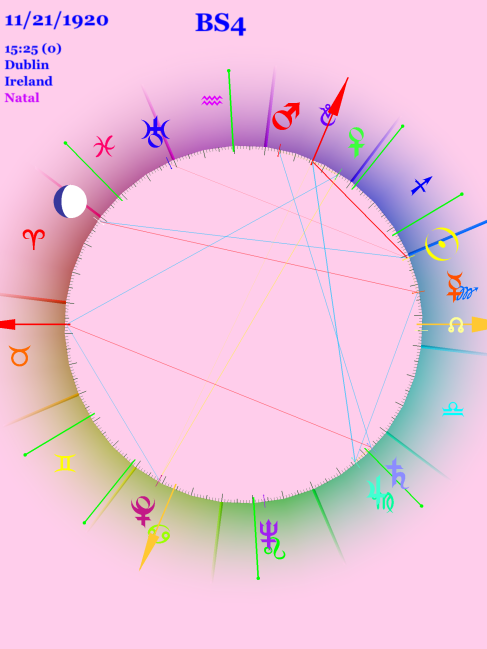 In  the chart for this  older Bloody Sunday  we see Mars again in the Tenth house and trine Saturn, instead of Pluto trine Saturn as in the previous chart.  Saturn is sesquiquadrate the Ascendant of the place of the event — Dublin.  While Pluto is not opposite the MC, it is still at the bottom of the chart and thus — symbolically — hidden from view.

One thought on “Sundays, Bloody Sundays”