The Wars of America – Part I

In general, American history is divided into four periods: before the Revolutionary War, from the Revolutionary War to the Civil War, from the Civil War to World War II, and after World War II. This division is not just arbitrary. Obviously there was a big change to the country after it declared itself independent from Great Britain and successfully fought a war to achieve that end. The Civil War allowed former slaves to “vote” and the many industries who had made a profit during the war, and specifically the railroads, were able after the war to continue to get very big and dominate the country – the appropriately named (First) Gilded Age was the result. And after the Second World War the defense industries that were empowered during the War were able to continue their growth with the convenient rise of the Cold War. Many technologies that were developed for the war were put to peace-time use which resulted in a more technological-oriented society.

So below we will look at the astrological patterns that existed during all three of these boundary events, the three wars that defined America. One can think of the first period as one of youth, the second period as one of adulthood, and the third period, the one we are in now, as the period of maturity.

The official dates for the Revolutionary War are from the Battle of Lexington and Concord (April 19,1775) to the surrender at Yorktown (October 19, 1781). The dates for the American Civil War are from the firing on Fort Sumter (April 12, 1861) to the surrender at Appomattox court house (April 9, 1965). The dates for American participation in World War II – the Americans were definitely late to the party – is measured from the attack on Pearl Harbor (December 7, 1941) to the surrender of Japan (Germany had surrendered 4 months earlier) on September 2, 1945. One notices that the wars got larger – more participants and over a larger area — and more bloody over time.

This first image for June 23, 1777 is not, as far as I know, a stand out date in the Revolutionary War. Notice that all three outer planets are near their birth locations. This is not surprising, considering that this chart is less than a year after birth. What the chart does show is that Uranus is passing over the Descendant and on this date is exactly opposite the Ascendant for the first time since birth. Again, not surprising since the natal position of Uranus is close to the Descendant. Whereas the Ascendant relates to the personal projection – a good synonym is persona – the Descendant is the opposite point, and indicates how we relate to the outside world. In personal astrology, this often is used to refer to the partner or people one draws to oneself or open enemies. In either case, it refer to energy coming to us from outside, which can easily be seen as a war which also comes to us. In the second chart, for November 23, 1778 we see that Neptune has come to the Midheaven of the United States. The Midheaven refers to the way the country relates to the outside world, one can see it as a public persona as opposed to the private persona of the Ascendant. I am at a loss for an interpretation of Neptune on the Midheaven that would relate to a war. The symbolism would suggest that our public image is unclear, uncertain, foggy. Perhaps this is just an effect of Neptune having almost exactly twice the period of Uranus (84 vs. 165 years) and Uranus-Descendant is the operative aspect.

Let’s move on the the Civil War. Here there is only one chart, for March 11, 1962. The war had started almost a year earlier. We see both Uranus opposite the Ascendant as in the first Revolutionary War chart, and Neptune conjunct the IC (Imum Coeli – the Bottom of the Sky) of the United States chart, opposite the Midheaven. This is about one Uranus cycle, 84 years, after the first chart. The fact that Neptune is now opposite the earlier position (the second chart for November 23, 1778) is not surprising since the period of Neptune is almost exactly double that of Neptune. Note also that since the natal Uranus is close to the Descendant and the natal Neptune is close to the Midheaven, these periods are also close to a Uranus return and a Neptune bi-return. But we do see a pattern. 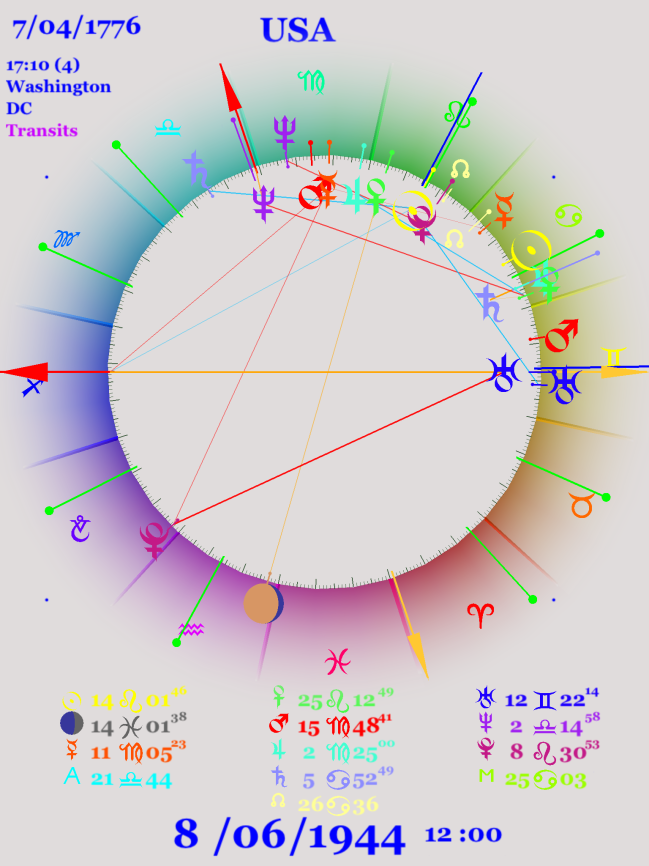 Let’s look at World War II. The first chart is for November 5, 1942, the first time Neptune conjoined the Midheaven of the United States on this cycle. Then the second chart for World War II for August 6, 1944, one year to the day before the dropping of the atomic bomb on the Japanese city of Hiroshima, the first pass of Uranus to the Descendant of the United States. Also Neptune is very close – one degree beyond – the Midheaven. This was again one Uranus cycle and one-half a Neptune cycle since the Civil War. The pattern repeats itself.

The Descendant is where energy comes in to you from outside, and so Uranus on the Descendant suggests disturbance, upset coming into the country, like for example as war. At least it was in the three cases we looked at. Since we have only the United States a an example, and only three cases to draw upon, we can’t draw an overwhelming conclusion. But in every case there was, the correlation was definite.

In part two of this subject, we will look at examples of Uranus on the Descendant before the birth of the country to see if the patten holds. And we will look at the obvious – when will this pattern repeat again.

One thought on “The Wars of America – Part I”